In 2009, our CEO, Clark attended a tradeshow in Minnesota and afterwards, a bit on a whim, stopped by Felling Trailers facility to see if they would potentially be interested in a partnership. That was the start of a long and successful partnership– and friendship. FCC and Felling Trailers have grown together over the years, and FCC recently received Felling’s Platinum award for the amount of contracts they’ve been awarded to meet specialized trailer needs.

One of the reasons Federal Contracts Corp believes so strongly in Felling Trailers is not just their commitment to quality, but also their commitment to innovative products and willingness to customize those products to meet unique needs. This comes up frequently with government agencies and their often unique requirements.

An example of this is Felling’s response to a longtime customer’s need for heavy-duty triple-reel trailers capable of hauling three 97×77” 10,000lb reels. Oh and by the way, they needed them in a 4 week timeframe, when standard timeframe is 10 weeks. With millions of dollars of trailer inventory in stock, Felling was able to demonstrate the flexibility and innovation of their products and their facility by converting a standard three-reel trailer to a heavy-duty three-reel hauler. On top of this, the trailer is designed with a removable reel rack so that the trailer has multiple functionalities.

This is the kind of personalized service and versatile product that family-owned businesses like Federal Contracts Corp and Felling Trailers can provide to government agencies. 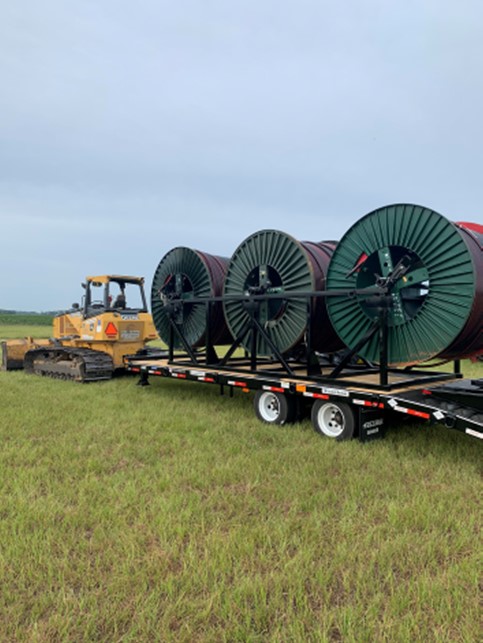 Felling Trailers has been providing innovative solutions to specialized transport needs for over 45 years. Starting out as a small shop and expanding to two factories that manufacture more than 5,000 trailers annually, Felling utilizes new technologies to reduce lead time and provide quality craftsmanship on a global scale.

FCC is proud to work so closely with Felling Trailers to provide custom solutions that turn a government agency’s visions into tangible products. We look forward to continuing to deliver on the promise of quality trailers that exceed expectations and reflect a commitment to continuous innovation with this strong partnership.